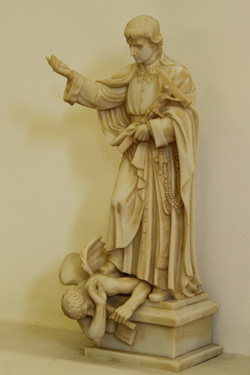 No saint has played a greater part in the development of the Legion than he. The handbook is full of his spirit. The prayers re-echo his very words. He is really the tutor of the Legion: thus invocation is due to him by the Legion almost as a matter of moral obligation.  He was canonised on 20 July, 1947, and his feast occurs on 28 April.

“Not only a founder, but missionary as well! And more than missionary; for we see yet another aspect: He is doctor and theologian, who has given us a mariology such as no one before him had conceived. So deeply has he explored the roots of marian devotion, so widely has he extended its horizons, that he has become without question the announcer of all the modern manifestations of Mary — from Lourdes to Fatima, from the definition of the Immaculate Conception to the Legion of Mary. He has constituted himself the herald of the coming of the reign of God through Mary, and the precursor of that longed-for salvation which in the fullness of time the Virgin Mother of God will bring to the world by her Immaculate Heart.” (Federigo Cardinal Tedeschini, Archpriest of St. Peter’s: Discourse at unveiling of statue of St. Louis-Marie de Montfort in Saint Peter’s, 8 December, 1948)

“I clearly foresee that raging beasts will come in fury to tear to pieces with their diabolical teeth this little book and him whom the Holy Spirit has used to write it, or at least to bury it in the darkness and silence of a coffer, that it might not appear. They will even attack and persecute those who read it and put it into practice. But what matter? So much the better! This vision encourages me and makes me hope for great success, that is to say, for a mighty legion of brave and valiant soldiers of Jesus and Mary, of both sexes, to fight the devil, the world, and corrupt nature in those more than ever perilous times that are to come!” (St. Louis-Marie de Montfort (died 1716): True Devotion to the Blessed Virgin Mary)