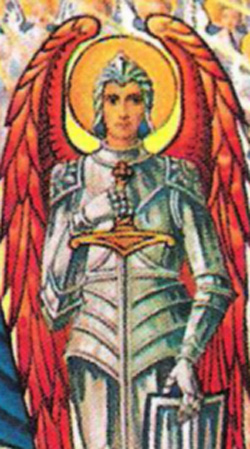 “Although the prince of all the heavenly court, St. Michael is the most zealous in honouring Mary and causing her to be honoured, while he waits always in expectation that he may have the honour to go at her bidding to render service to some one of her servants.” (St. Augustine)

St. Michael has always been the patron of the chosen people, first of the Old Law and then of the New. He remains the loyal defender of the Church, but his guardianship of the Jews did not lapse because they turned away. Rather it was intensified because of their need and because they are the blood-kindred of Jesus, Mary and Joseph. The Legion serves under St. Michael. Under his inspiration it must strive lovingly towards the restoration of that people with whom the Lord made an everlasting covenant of love. The feast of the “commander of the army of the Lord” (Josh 5:14) occurs on 29 September.

“According to Revelation, the angels who participate in the life of the Trinity in the light of glory, are called to play their part in the history of the salvation of man, in the moments established by Divine Providence. ‘Are they not all ministering spirits sent forth to serve, for the sake of those who possess salvation?’ asks the author of the Letter to the Hebrews. (1:14) This is believed and taught by the Church, on the basis of Sacred Scripture, from which we learn that the task of the good angels is the protection of people and solicitude for their salvation.” (Pope John Paul II)